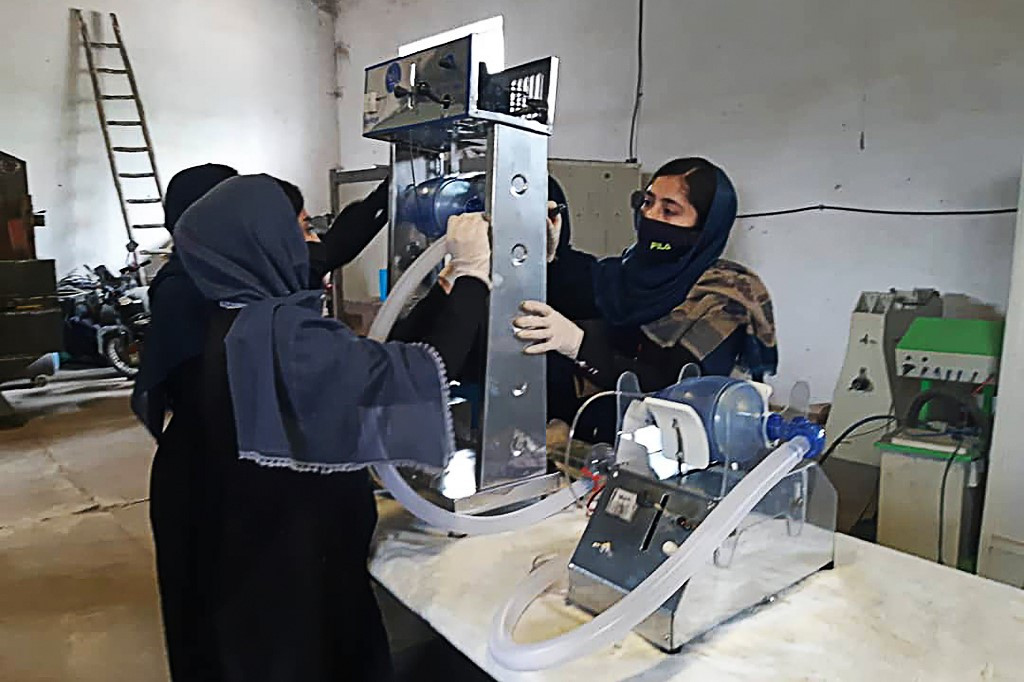 Workers of an all-female robotic team build a ventilator in preparation for COVID-19 coronavirus patients, at a workshop, in Herat on April 8, 2020. (AFP/Ahmad Idres Naderi)

A team of robot-designing girls in Afghanistan is trying to build a low-cost medical ventilator from car parts, as health authorities look to boost critical-care capabilities for coronavirus patients in the impoverished country.

If the teenagers succeed and can get government approval for their prototype, they say it could be replicated for as little as $300, where normally ventilators sell for around $30,000.

"The team is working with local health specialists, as well as experts from Harvard University, to produce the prototype based on a design by Massachusetts Institute of Technology," said Roya Mahboob, who runs an Afghan tech company and sponsors the team of five girls, aged 14-17.

They are part of a bigger group of high-achieving high school girls known as the "Afghan Dreamers", from the western city of Herat, where coronavirus is on the rise after thousands of people returned from neighboring Iran as it experienced a spike in cases.

The girls made headlines in 2017 after being denied visas to take part in a robotics competition in Washington -- before President Donald Trump intervened and they were allowed to travel.

They are taking engine and battery parts from a Toyota Corolla -- ubiquitous on the streets of Afghanistan -- to produce a prototype they started designing after the Herat governor called for more ventilators as coronavirus cases rose.

Central to the ventilator is a self-inflating plastic sac known as an Ambu bag that medical staff use to help patients breathe. The girls' prototype uses a mechanical system to operate the bag automatically and accurately.

Read also: Back to the future? Dutch revive 1960s ventilator for coronavirus fight

"The complicated part is how to adjust the timing and pressure of pumping, as different patients require different volume and pressure of air based on their age and the severity of their condition," Somaya Farooqi, the team's 17-year-old captain, told AFP.

With a population of 35 million, Afghanistan only has about 300 ventilators.

Wahidullah Mayar, a spokesman for Afghanistan's health ministry, said officials have asked specialists and engineers to help the team.

"We appreciate and encourage these hardworking girls, our sisters, for their efforts to produce ventilators," Mayar said.

Any ventilator prototype would have to be approved by the World Health Organization and the Afghan health ministry before the team could start producing more devices, Mayar said.

As of Wednesday, Afghan officials had reported at least 784 coronavirus cases and 24 deaths across the country. The true number of cases is feared to be much higher, as only limited testing kits are available.