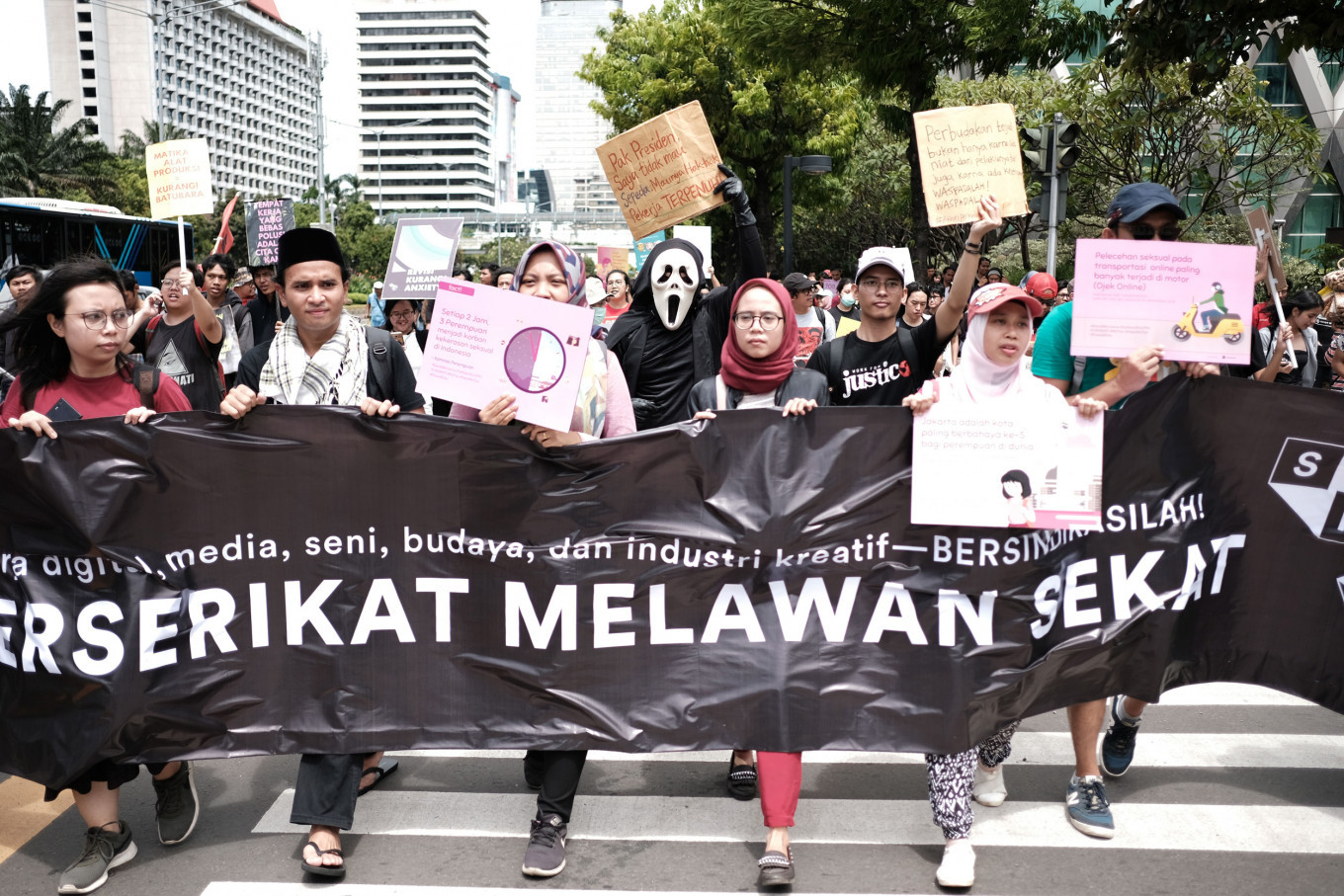 Media and creative industry workers hold a rally to commemorate Labor Day in Jakarta on May 2, 2019. (JP/Donny Fernando)

Freelance workers in the creative industry are resorting to loans to survive the economic downturn brought about by the COVID-19 pandemic, as they lack health insurance and other social safety nets, a survey indicates.

According to a recent survey conducted by Sindikasi, a media and creative workers union, about 22.3 percent of freelance workers who have reported a loss of income are taking loans to survive, while 20.6 percent of them have sold some of their belongings to make ends meet.

“If the condition continues, freelance workers have to choose whether to die because of COVID-19 or to die from starvation,” Sindikasi chairwoman Ellena Ekarahendy told journalists during an online press conference on Thursday.

Ellena said freelance workers in general were extremely vulnerable during economic downturns, as they had no social security from their clients and client could cut off their contracts without any compensation.

In the creative industry, filmmakers and videographers are the most affected subsector, followed by those working in performing arts.

“Many of the freelance workers are losing their income as their jobs require them to be in the field. For instance, art performers would have to perform in theaters with large audiences to earn their income,” Sindikasi researcher Fathimah Fildzah Izzati said.

In addition, the economic downturn has prompted companies to tighten their expenditure, which includes reducing their marketing budgets for advertisement. Market research firm eMarketer previously revised down its forecast for global advertising growth by $20 billion as advertisers shy away from marketing their products amid a humanitarian crisis.

Sindikasi’s data projects that the majority, or around 65 percent, of potential contract cancellations in the first half of 2020 would come from small projects worth between Rp1 million (US$53) to Rp15 million.

To reduce the freelance workers’ financial burden, Ellena urged the Tourism and Creative Economic Ministry to hire the creative industry freelancers to create content for the government.

“The ministry budget could be reallocated as a ‘creative workers emergency fund’ to hire the workers for producing content,” she said.

She also urged the Education and Culture Ministry to coordinate with the Manpower Ministry to start recording data on the economic impact of COVID-19 on the creative industry, which would provide the government with a clear view on the industry’s condition.

The COVID-19 induced economic downturn has threatened millions of workers worldwide, including in Indonesia, as the International Monetary Fund (IMF) projects the worst global recession since the Great Depression.

The IMF also projects that Indonesia’s unemployment rate will rise to 7.5 percent this year from last year’s 5.3 percent as the pandemic has upended supply chains, forcing companies to lay off employees and crushing demand for goods as consumers stay at home.

According to data from the Manpower Ministry and the Workers Social Security Agency (BPJS Ketenagakerjaan), as many as 2.8 million people have already lost their jobs as of April 13 or were sent on paid or unpaid leave.