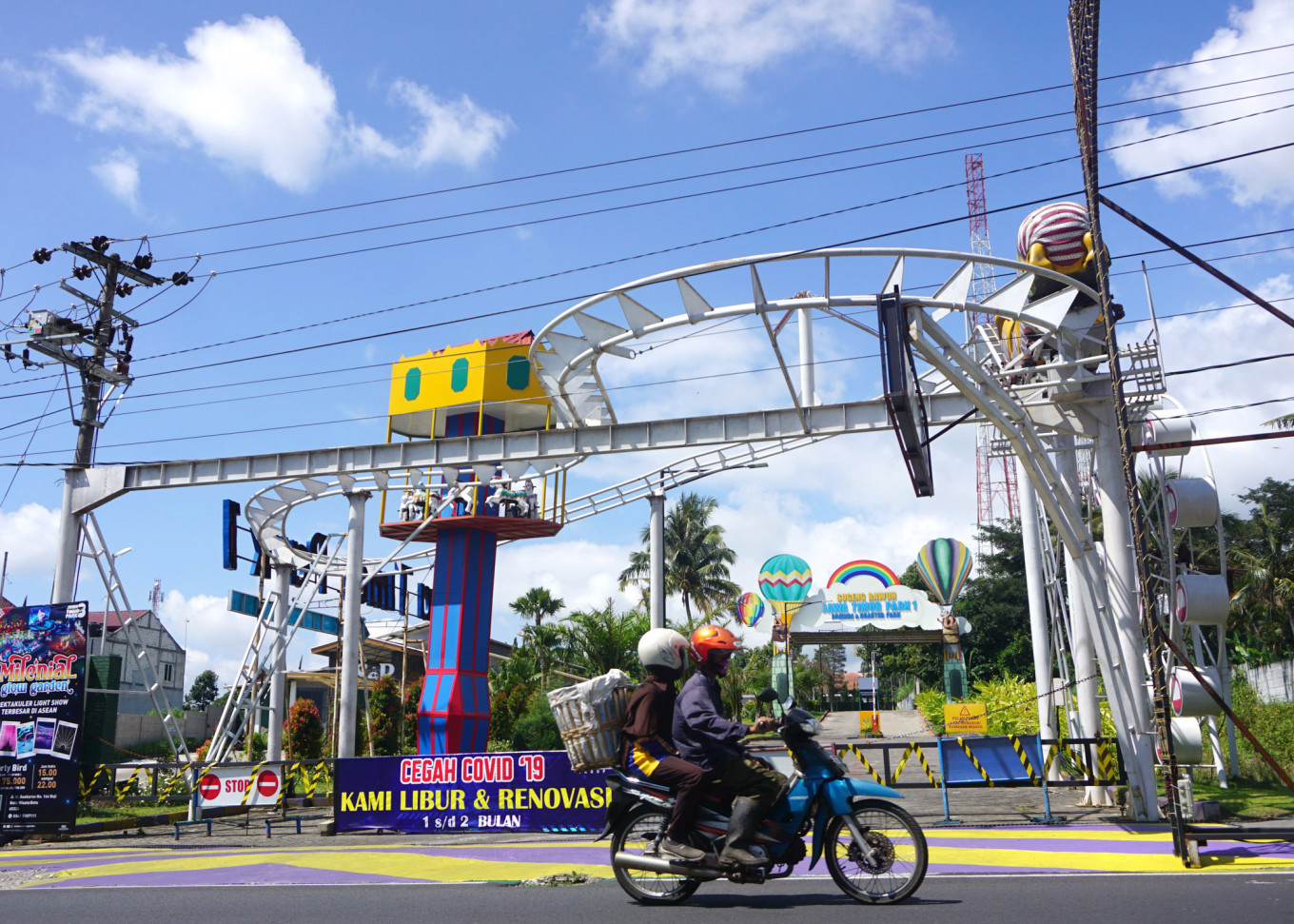 A motorcyclist passes the gate of Jatim Park 1 to the Batu Tourism City in East Java on April 2. The Batu city administration extended the alert status for COVID-19 following the state emergency declared by the Central Government until May 29. This means the tourist site must remain closed. (JP/ Nedi Putra AW )

Tourist businesses are waiting for real action from the government to help them survive COVID-19, which has almost brought their industry to a halt.

Representatives of hotel, restaurant and travel associations said none of the financial relief promised by the government for the devastated tourist industry had been realized.

“We are waiting for real action now. Please help us," Indonesia Tour and Travel Agency Association (ASITA) chairman Nunung Rusmawati said in Jakarta on Wednesday in a virtual hearing at House of Representatives Commission X with representatives of tourism and related industries.

Tourism is the hardest-hit industry, with many hotels and travel agencies closing down due to the lack of guests. Hotel occupancy rates have also fallen sharply, and thousands of planned visits to Indonesia have been canceled.

ASITA reported that 98 percent of its 7,000 members consisting of travel agents and tour operators have temporary closed their operations and furloughed employees. Meanwhile, the Indonesian Hotel and Restaurant Association (PHRI) reported that 1,642 hotels and 353 restaurants have so far shut down. The association also reported that 180 tourist destinations and 232 tourist villages across Indonesia had been temporarily closed.

“With the current situation, the majority of workers at hotels and restaurants have been put on unpaid leave. [...] Most of our members cannot pay their employees’ salaries anymore,” PHRI’s chairman Hariyadi Sukamndani also said on Wednesday. He expressed hope that the pre-employment card program would help the laid-off workers get new jobs once the pandemic is over.

Hariyadi called on the government to immediately realize the relief program for tourism and related industries to keep them afloat. According to him, the business hoped the government could provide financial aid in the form of reduced income tax, an exemption of service tax and other payments, such as related to the use of water.

The players in the tourist industry also hope the government can delay premium payments for the Health Care and Social Security Agency (BPJS Kesehatan). They also asked for incentives for electricity and water bills and expect soft loans to help them maintain their cash flow and resume operations.

“And with regard to Idul Fitri bonuses [THR], we hope the government will allow companies that are facing cash flow problems to delay the payment until the end of the year,” said Hariyadi.

On Feb.  26 the government unveiled a Rp 10.3 trillion (US$722 million) stimulus package to cope with the harsh impact of the COVID-19 pandemic on the country’s economy. As part of the package, Rp 298.5 billion will be allocated for airlines and travel agents. However, the stimulus package has not been realized until now.

On March 31, the Financial Services Authority (OJK) issued OJK Regulation No. 11/2020, which relaxes credit rules for the business sectors affected by COVID-19, including tourism. However, Hariyadi said many businesspeople within the tourist industry were not aware of the loan repayment relaxation yet.

The Finance Ministry announced on April 13 the expansion of fiscal incentives previously only given to the manufacturing sector to other 11 sectors, including hotels, transportation and trade. Fiscal incentives that will be given include income tax exemptions and reductions.

Tourism and Creative Economy Minister Wishnutama Kusubandio said on Thursday that the ministry and other government institutions were in talks on the realization of the financial incentives.

“Basically, what we want to do is help the tourist industry and creative economy survive amid this pandemic,” said Wishnutama.

Indonesia has seen a sharp drop in tourist visits in these past few months. According to Statistics Indonesia (BPS), foreign tourist arrivals fell 28.85 percent to 885,067 year-on-year in February. The monthly figure was down 30.42 percent from January.

There were 2.16 million foreign tourist arrivals in January and February combined, marking a drop of 11.8 percent from the 2.45 million during the same period last year.

Meanwhile, from January to April, PHRI reported potential estimated losses of $4 billion at hotels and restaurants due to the sharp drop in foreign tourist arrivals, and another Rp 60 trillion in losses due to the fall in the number of domestic tourists.