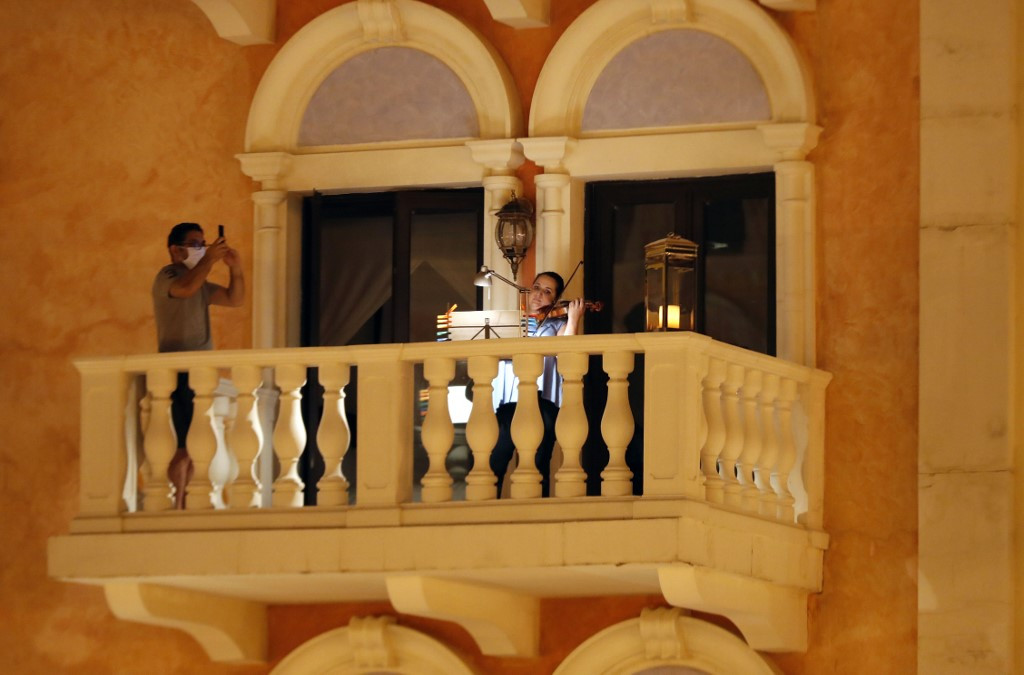 Members of Qatar's Philharmonic Orchestra perform from their balconies to punctuate the monotony of social distancing as the weekend begins, April 17, 2020 in Doha during the coronavirus COVID-19 pandemic. (AFP/File)

Strains of Bizet's Carmen reverberated around Doha's man-made Pearl island as members of Qatar's philharmonic orchestra performed from balconies to punctuate the monotony of lockdown.

Bars, restaurants, cinemas and mosques are shut to contain the spread of coronavirus.

But those within earshot of the musical neighbors have been treated to renditions of numbers including Elton John's "Can You Feel the Love Tonight", both this Friday and last.

"Everyone plays a bit. We are four in total," said Nicole Pressler, the QPO's principal flautist who was joined by a harpist, a trumpet player and a violinist.

Pressler lifted her son up to hear applause and cheers from residents and passersby during a break in the performance as a couple embraced and swayed on a nearby balcony.

More accustomed to playing to packed crowds at the ultra-modern Qatar National Convention Centre and the Katara Opera House, the artists decided to play from home "very spontaneously", Pressler said.

"But still it gives us joy to play. We come together as friends and colleagues with distance but united. In the same moment I even miss my orchestra more," she said.

The acclaimed orchestra, whose scheduled performances were among the first events to be cancelled as Qatar sought to contain the virus, was founded in 2007 and has since toured the world.

There's "not too much echo and the audiences are getting bigger and bigger. It was nice tonight," said the orchestra's director Kurt Meister who attended the 30 minute concert.

Qatar reported its largest single-day jump in coronavirus cases with 560 confirmed on Friday, bringing the total to 4,663. Seven people have died and 464 have recovered, according to official statistics.