It's potatoes, again, for circus animals in Italy lockdown 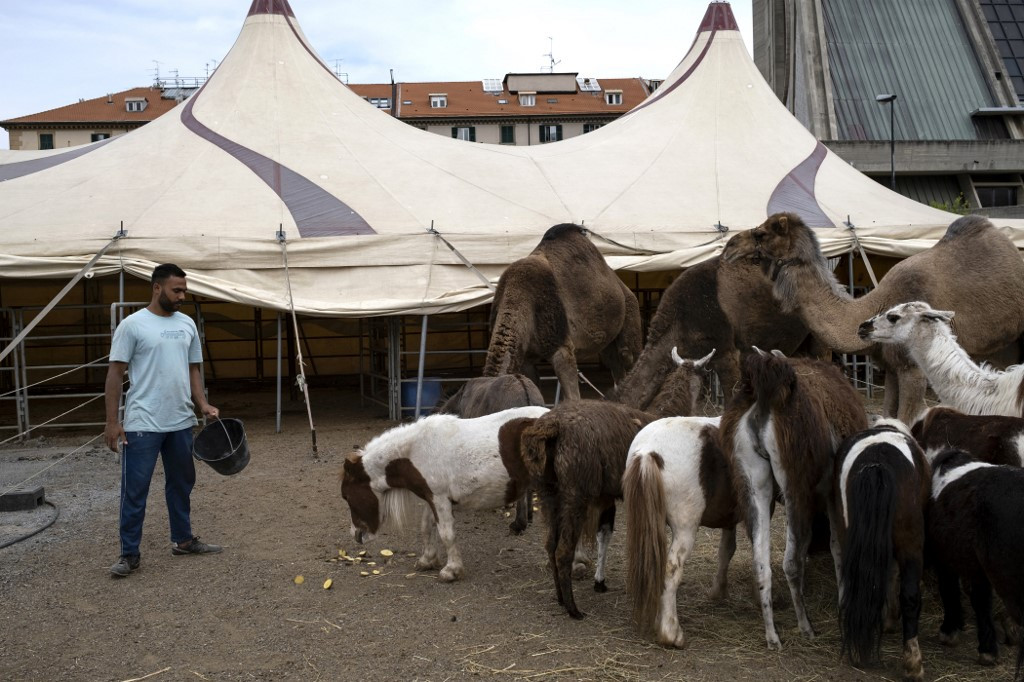 A member of the Circo Millennium feeds the animals of the circus, on April 17, 2020 in Savona, Liguria Region, northwestern Italy, during a strict lockdown in the country to fight against the novel coronavirus. (AFP/Marco Bertorello)

What do you call a hungry alligator during a coronavirus lockdown? An Italian circus stuck in a car park for two months has the answer: a problem.

The Millennium Circus was supposed to be performing along the Ligurian coast in northern Italy, but the virus and a national shutdown of the country stopped it in its tracks.

A kangaroo lies listlessly in its enclosure, while llamas, camels and ponies gather at the fences dividing their respective pens, keeping each other company.

Like the rest of the country, they can do little but kill time, while waiting for the potatoes to be handed out.

The 40 animals -- parrots, geese, a huge-horned buffalo -- and 35 circus performers and staff were only supposed to be at the vast car park for a few days, before heading up the coast to seaside resorts.

But the troupe has been at a standstill since February 20 and has to rely on the help of local associations and animal lovers to feed its beasts.

"They eat about 200 kilos of fodder a day, as well as apples and carrots. And they drink about 1,000 liters of water daily," Derek Coda Prin, the artistic director, told AFP.

Amid the lorries, trucks and caravans, an acrobat is rehearsing her vertical bar act.

"At this point, unfortunately, the animals have become a problem," said Coda Prin, whose family has worked in the circus for five generations.

"They are our life companions, our friends, and we try to look after them in the best possible way. But they're not like dogs or cats you can give your leftover lunchtime pasta to."

Paradoxically, among those helping the Millennium Circus is the ENPA, the national association for the protection of animals, which fights the exploitation of animals in circuses.

As well as the pressing issues of the current lockdown, the circus is also worried about the future.

Coda Prin said he was worried the virus -- believed to have originated in wild animals -- may put the paying public off circuses featuring feathered and fanged creatures.

"I think it will have created a bit of a dangerous psychosis for our line of work," Coda Prin said.