Don’t stand so close to me 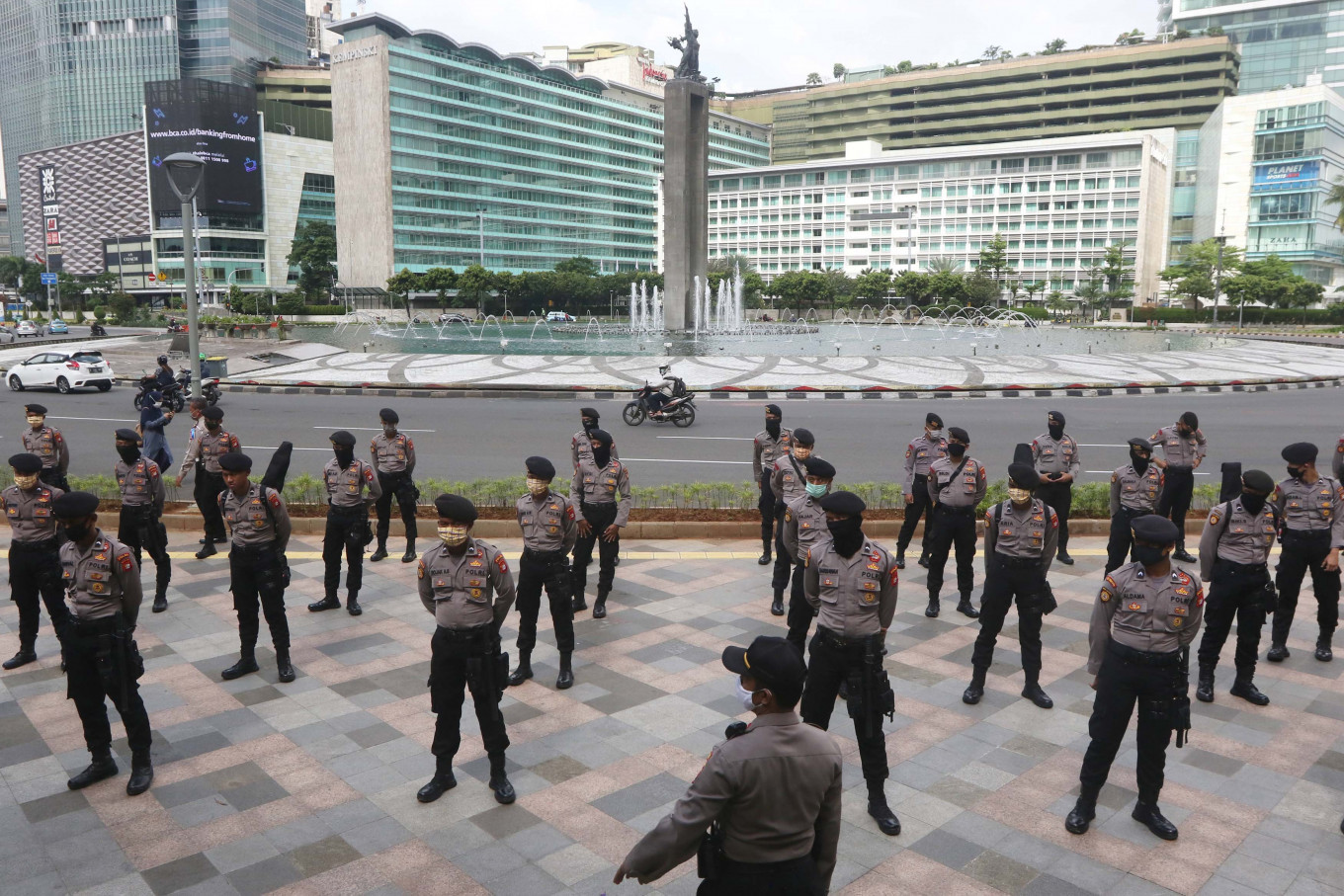 Police officers keep a distance from one another at the Hotel Indonesia traffic circle in Jakarta on Wednesday (04/08/2020). The Jakarta administration will implement large-scale social restrictions (PSBB) on Friday to tackle the COVID-19 crisis. (JP/Dhoni Setiawan)

We have come too far to still be oblivious to the state of emergency we are in now.

As an avid concertgoer, I’m used to the lovely surge of adrenaline I get when I’m one of a cheering crowd. So it was initially too much for me to digest that I could have an anxiety attack on entering a spacious grocery store, when a quick scan caught sight of more than 10 people inside. I was terrified.

The next day, after President Joko “Jokowi” Widodo announced the first cases of COVID-19 in the country, I developed a high fever induced by an allergic reaction, followed by a stomachache that ended with a trip to the emergency ward. The rest of the week, I was in a stupor.

While this could all be psychosomatic or just bad luck, being told so didn’t make the pain go away.

In such a helpless state, I headed to the next level: anger. This was similar to what I experienced less than three months ago, when my neighborhood turned into a swamp due to the massive flooding at the turn of the year. We were left to our own devices to continue with normal life as best we could.

During this emotional rollercoaster, I consumed all the news and information I could about the coronavirus; I started to scrutinize everything the government had done, was doing or said it would do in its relief efforts while trying to shift my mental gears so I would be ready for anything and everything.

The fear has not gone away. In a pandemic, maybe it’s just a matter of when we’ll catch the disease and how severe it will be for each of us. But anger does help in offering some perspective.

The uncontrollable spike in the daily tally, despite preventive and control measures, is not the only curve we’re seeing these days. We’re also seeing — and welcoming — growth in the learning curve that shows people turning their fear and anger into taking care of each other.

The sporadic efforts at crowdfunding and other collective actions to ensure that the most vulnerable people could still make ends meet have had a greater social impact than the “Unite in the fight against the coronavirus” government tagline.

The fact is, Indonesia has never dealt with — nor ever put protocols in place for — a public health crisis this huge. If it had, no leading labor-intensive company would opt for mass layoffs in a time so full of uncertainty — nor would it be allowed to take such action.

I can’t help but wonder whether the administration fears potential attacks from political opponents more than the rapidly spreading coronavirus, while people are trying to break the law of the jungle maxim, “every person for themself”.

Another takeaway from this learning curve is how well people are adapting to this sudden change in personal hygiene and their way of life.

We’ve all probably seen the meme on how we were expecting to see flying cars in 2020 but instead, we’re being taught the basics of hand washing.

Come to think of it, the scare over the Y2K bug — also known as the “millennium bug” — that spread around the world at the turn of the millennium was the threat we needed for techies to create more sophisticated coding language. And here we are today, in an era when we can easily close a financial deal online and can make living one day at a time stuck at home bearable.

The pandemic might divide people into the wise and the clever: Those who play it safe to stay alive and those who challenge the unknown to regain control over the fate of human civilization.

It’s too soon to say which group will make it through the pandemic, but for now, it is likely to be those most prepared for future encounters with human pathogens.

This group will include those countries with reliable crisis management systems in place, in which scientists, tech firms, businesses, civil organizations and citizens all play their given roles. The societies we may judge as “overdoing it” now may also belong to this group, too. We just don’t know.

Some things for sure are that face masks and gloves have quickly become a fashion statement we can’t leave home without, that being laidback has come to be seen as heroic, and that 2020 will be remembered as the year of humility and binge-buying toilet paper.

It would be nice if I could return to being my old sociable self, waving my hand from a flying car. That is, only if scientists can find alternative energy sources that will never harm the environment and let unknown, unnamed fungi, bacteria and viruses break out to consume the world as we know it.

In the meantime, though, maintaining physical distance is our safest bet. It is the least we can do to protect ourselves and each other — especially if all the government’s measures to curb the virus’ spread ends in failure.