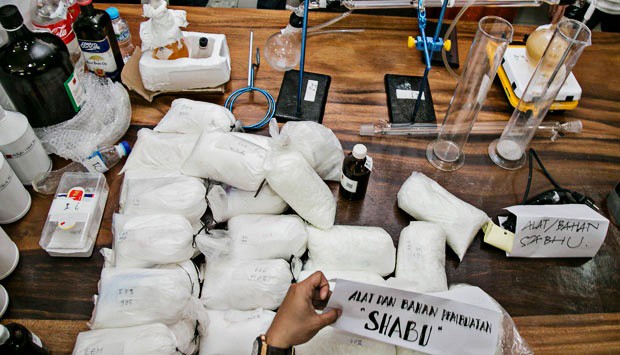 Dangerous substance: The police display packages of crystal methamphetamine in a press conference in Jakarta. (Tempo/-)

The North Sumatra police fatally shot a suspected drug dealer and arrested three others in a drug bust on Thursday.

The suspects were caught trying to sell 4 kilograms of methamphetamine smuggled from Malaysia, which was packed into Gayo Aceh Coffee packaging.

North Sumatra police chief Insp. Gen. Martuani Sormin Siregar said on Saturday that the police shot one of the suspects because he was resisting arrest.

He added that the four suspects were residents of Lampung and they were part of an Aceh-Palembang drug ring.

According to Martuani, the methamphetamine was being taken from Aceh to be sold in Lampung and Jakarta. Each dealer would receive Rp 25 million (US$1,745) for selling the drugs.

"They are new drug dealers from Lampung and their modus operandi was also new as they hid the drugs in coffee packaging," he said during a press conference in Bhayangkari Hospital at North Sumatra's police headquarters on Saturday.

Martuani said police would further investigate the case as he suspected some other drug dealers might be using the same methods.

"We are very serious in taking measures against those who are linked to drug dealing," he said.

The suspects were charged under the 2009 Narcotics Law and face a maximum sentence of 20 years of imprisonment. (trn)