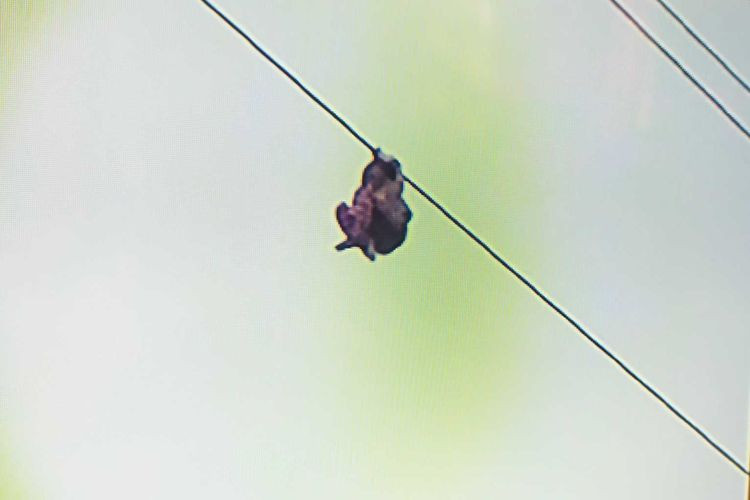 A screen grab of a viral video shows a 9-year-old girl suspended from an electric cable on April 16, 2020 in Curug district of Tangerang regency, Banten. (Kompas.com/File)

Local officials have confirmed the veracity of a viral video that shows a girl suspended on an electricity cable 15 meters above the ground in Curug district of Tangerang regency, Banten.

The video had been reposted multiple times on social media by Friday.

The girl, reportedly a 9-year-old resident of Curug, is seen in the video screaming for help while clinging to an extra high voltage (EHV) power cable that was being installed at the time of the incident.

Emergency and logistics head Kosrudin at the Tangerang Disaster Mitigation Agency (BPBD) confirmed the veracity of the video, saying that the incident occurred on Thursday afternoon.

Kosrudin said that the girl was playing with friends near the EHV cables at the site of the installation project when she was inadvertently suspended in the air.

“She did not know that the cables were being [installed]. She hang on to the cable when it was still low,” Kosrudin said as reported by kompas.com on Friday.

Unaware that the girl was hanging on to the cable, the workers continued to lift the cable into position. The girl reportedly hung on as the cable was pulled up higher and higher, as she was afraid to let go.

“Help, I can’t hold on anymore. I want to get down,” the girl is heard crying out in the 1-minute, six-second video clip.

The incident sparked a flurry of activity among local residents, who scrambled to get a bed mattress in place beneath the girl to catch her as she fell.

Kosrudin said that the girl had survived the fall with only light injuries, and had been taken immediately to a local hospital.

Rizki Aftarianto, of the Tangerang branch of state-owned electricity firm PLN, apologized for the incident and said he would increase supervision at project sites.

He also urged members of the public, especially young children, not to play in or around project sites, kompas.com reported. (mfp)