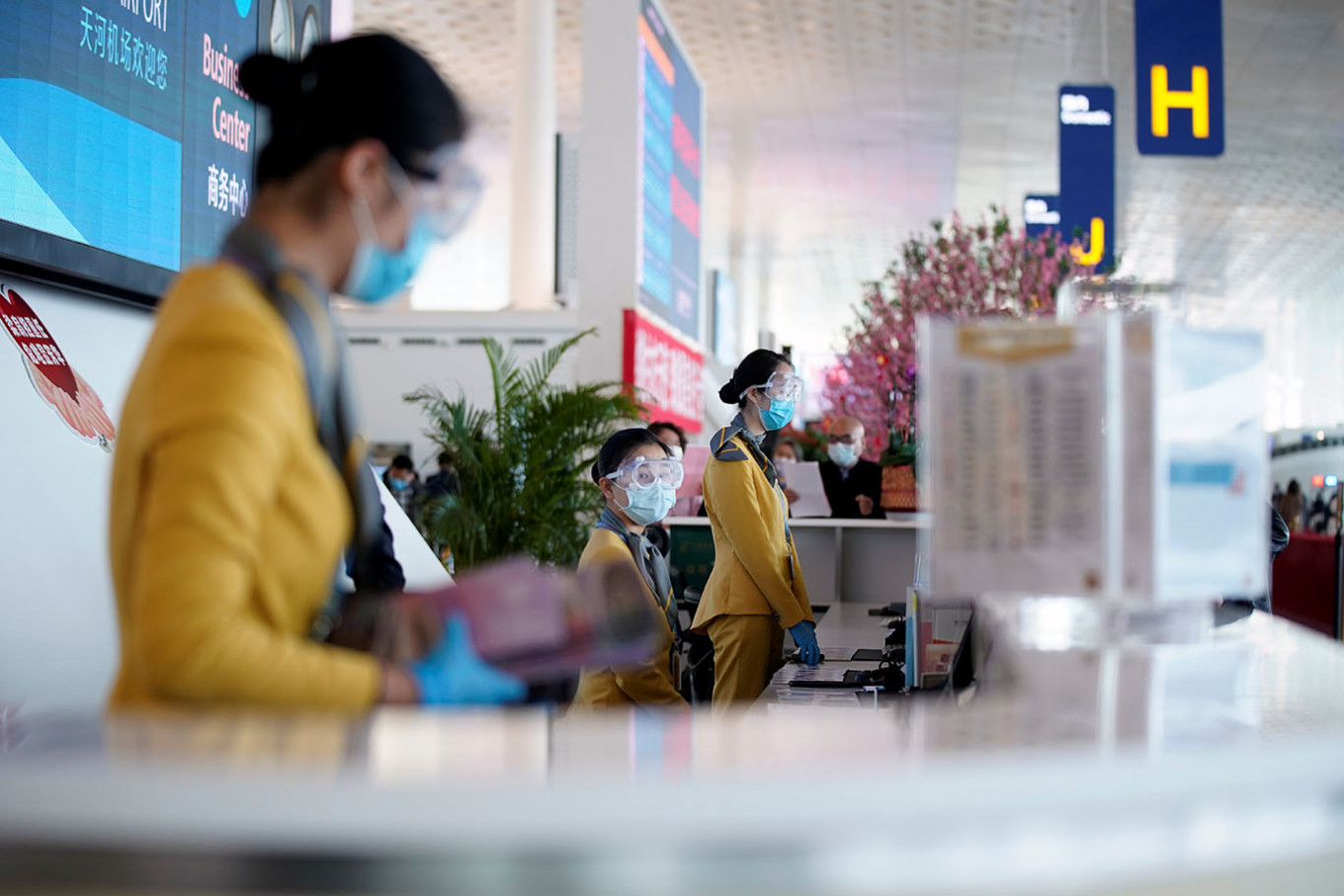 Staff members wearing face masks and goggles are seen at a counter at the Wuhan Tianhe International Airport after travel restrictions to leave Wuhan, the capital of Hubei province and China's epicentre of the novel coronavirus disease (COVID-19) outbreak, were lifted, April 8, 2020. (REUTERS/Aly Song)

China’s economy recorded the first contraction in decades in the first quarter as the coronavirus outbreak shut down large parts of the world’s second-largest economy and dimmed the global outlook.

Gross domestic product shrank 6.8 percent in the first quarter from a year ago, the worst performance since at least 1992 when official releases of quarterly GDP started, missing the consensus forecast of a 6 percent drop. Factory output fell 1.1 percent in March, retail sales slid 15.8 percent, while investment decreased 16.1 percent in the first three months of the year.

The sharp contraction underscores the pressure that Chinese policy makers face as they attempt to revive the economy without nullifying efforts to contain the virus. The continued spread around the world also threatens to add fresh downward pressure on China’s exporters in a feedback loop that could throw millions out of work.

“The first quarter contraction is not a surprise, considering the nationwide lock down in late January and February,” Robin Xing chief China economist at Morgan Stanley Asia, said on Bloomberg TV. “Most major economies are still in the lockdown stage. As a result, growth in the second quarter will be shallow, just marginally above zero.”

China’s markets held gains after the release as investors digested the data. The Shanghai Composite Index was up 0.7 percent at 10:02 a.m., while the Chinese currency was 0.2 percent stronger versus the dollar. The Hang Seng Index climbed 2.4 percent in Hong Kong.

China’s economy was forced into a paralysis in late January as the epidemic that first started in Wuhan spread across the country. The economy remained shuttered for much of February with factories and shops closed and workers stranded at home. The process of resuming business has been disappointingly slow and the return rate only inched up to around 90 percent at the end of March, Bloomberg Economics estimates.

To cushion the economic blow, China has unveiled a range of support measures, although not on the scale of other nations.

That includes 3.55 trillion yuan (US$502 billion) in low-cost funding provided to financial institutions, 1.29 trillion yuan in pre-approved local government special bonds, and 1.6 trillion yuan in cuts to various fee taxes, according to the nation’s cabinet.

The central government is also mulling other policies like raising the deficit-to-GDP ratio, issuing special sovereign bonds and increasing the local government special bond quota, in order to fuel a faster economic recovery, according to a recent article from a senior official.

Exports fell less than expected in March as production capacity was gradually restored, but economists warn bigger headwinds lie head as the rest of the world shuts down and external demand diminishes.