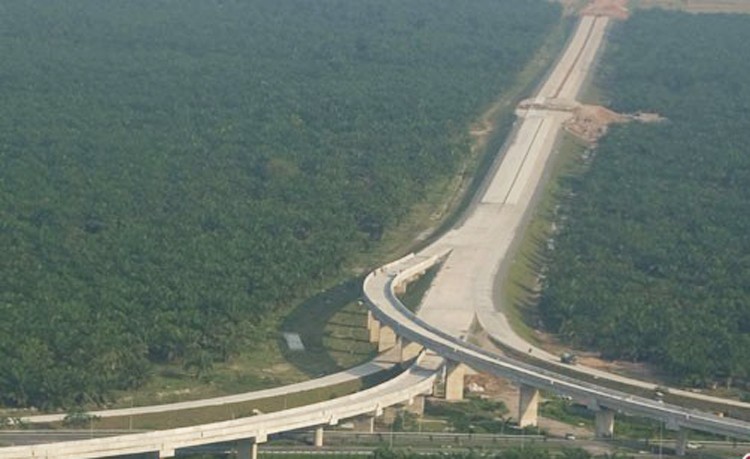 This undated aerial photograph shows the development of a toll road connecting Medan to Tebing Tinggi, both in North Sumatra. The road is one of the national strategic projects being developed by the central government. (Antara/Irsan Mulyadi)

The government has been assessing 11 new infrastructure projects to be included in the National Strategic Projects (PSN) in a bid to attract investment and create jobs.

"I had a discussion with the coordinating economic minister as we want to assess which projects [in the PSN] can be funded by the private sector, so that we won't just rely on the state budget," Coordinating Maritime and Investment Minister Luhut Pandjaitan told a webstreamed coordination meeting on Wednesday, as quoted in the statement. His office did not elaborate on projects that might need to be scrapped.

“Hopefully we can move fast given the current situation caused by the pandemic,” he said.

Indonesia has been refocusing its state spending to fund the fight against the COVID-19 pandemic with a cash-strapped budget. The government has allocated Rp 405 trillion (US$25.79 billion) of funding for the pandemic budget, causing state spending to increase by nearly 3 percent to Rp 2.6 quadrillion while revenue is expected to slump by 21 percent to Rp 1.7 quadrillion.

Luhut expected the privately funded projects could continue their development and absorb workers while contributing to the country's foreign exchange reserves.

A project included in the PSN list will be granted an easier licensing process and accelerated land procurement, as well as government guarantees on any political risks.

Septian Hario Seto, the Office of the Coordinating Maritime Affairs and Investment Minister’s acting deputy head for investment coordination and mining, said that two of the proposed 11 new projects were an industrial zone and an industrial park.

The Obi Island Industrial Zone in South Halmahera regency, North Maluku, he said, had almost 2,000 workers and it already had a phase-two rotary kiln-electric furnace (RKEF) smelter for ferronickel production with an estimated investment of $800 million.

“The significant development [in the industrial zone] will be the high-pressure acid leaching [HPAL] smelter construction, which will be completed in the third quarter of 2020,” he said, adding that the investment for the smelter was estimated at $1 billion.

Septian went on to say that the second suggested project for the PSN was the Weda Bay Industrial Park project, where a smelter operation was halted due to the coronavirus outbreak. The plan for its 2020 investment was around $4 billion to $5 billion while exports were estimated to reach at least $2 billion by 2024.

The other nine projects are six smelter projects, one coal-to-methane processing area in East Kalimantan, a methane industrial area and the construction of the Kediri-Tulungagung toll road in East Java.

“The projects’ investors are being financially evaluated to make sure they can finish the projects by 2024 and be included in the PSN,” he said.

Coordinating Economic Minister Airlangga Hartarto said there were currently 232 new project proposals to be included in the PSN, 84 of which were proposed by ministries, 123 projects by regional governments and 17 by state and regional-owned enterprises (BUMN/D) and eight projects by private sector investors.

At the same time, the government has scrapped 10 projects from the PSN list as their estimated completion times are beyond 2024, the year when President Joko "Jokowi" Widodo's second term will end. (eyc)