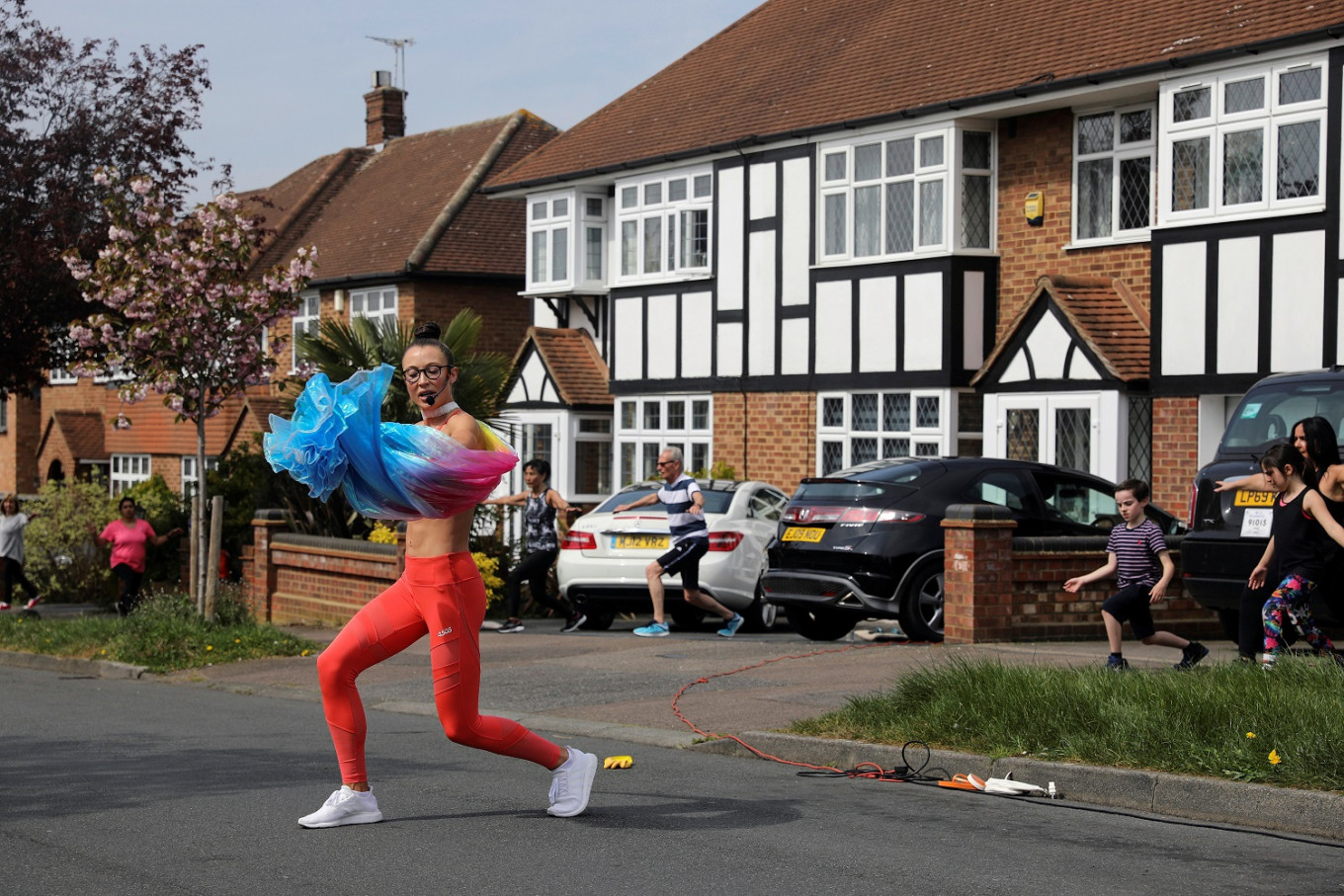 Elyse Blemmings, also known as the Mancunian Motivator leads residents of Chigwell Park Drive in a fitness class outside their homes in Chigwell, Britain, on April 16, 2020. (REUTERS/Simon Dawson)

In a suburban enclave on the northeastern fringes of London residents are having their heart rates - and their spirits - lifted by the "Mancunian Motivator."

So popular have the street workout routines of Elyse Blemmings become in these times of enforced idleness that some of the neighbors are also meeting new friends among all the bending and stretching.

"It's brought back, I suppose, what everyone's feeling, a big sense of community spirit," she told Reuters.

Blemmings, 31, was used to streaming her workout sessions online, but after neighbors spotted her doing her fitness routine in Chigwell, she decided to share her motivational talents closer to home.

Originally from the northern city of Manchester - hence the "Mancunian" name - Blemmings said that as well as the benefits of physical exercise, her sessions in the street helped to build social links in the community in a time of social distancing, and were bringing different generations together.

Britain has been under lockdown since March 23, and police have been given the power to enforce social distancing rules. On Thursday, the government extended those restrictions for another three weeks at least.

But for Blemmings' neighbors in Chigwell, the fitness sessions have been an unexpected highlight of the lockdown.

Read also: Should I exercise during the coronavirus pandemic? Experts explain the just right exercise curve

"It's just fun and one of the most important things is ... we've got to know neighbors that we don't really know," said Margaret Lakey, 79, who has lived on the street for 50 years but can no longer play bowls as usual.

"We're waving, aren't we, to neighbors we've never spoken to before."

After starting out with two sessions last week, Blemmings said she wants to keep them up for as long as they are wanted.

Children as young as 5 took part in the session, with older neighbors joining in.

"It's good for everyone's spirits, old or young. We're at the older age and the young ones are out as well," Tony Aiken, 72, told Reuters.

Blemmings said that even once the restrictions are lifted, she hoped the community bonds formed in the exercise would remain.

"I think it's going to be very hard to go back to absolutely normal when people have been outside doing jumping jacks in front of each other. Let's be honest everyone looked ridiculous today," she said.

"So if they go back to just ignoring each other, that's just weird."